Back on José’s EP.

A return to José’s studio, this time for more work on his own EP for which I co-wrote the lyrics on this track, having co-written a song we recorded a couple of years ago.

Thanks, José for a couple of your instagram shots, used below. 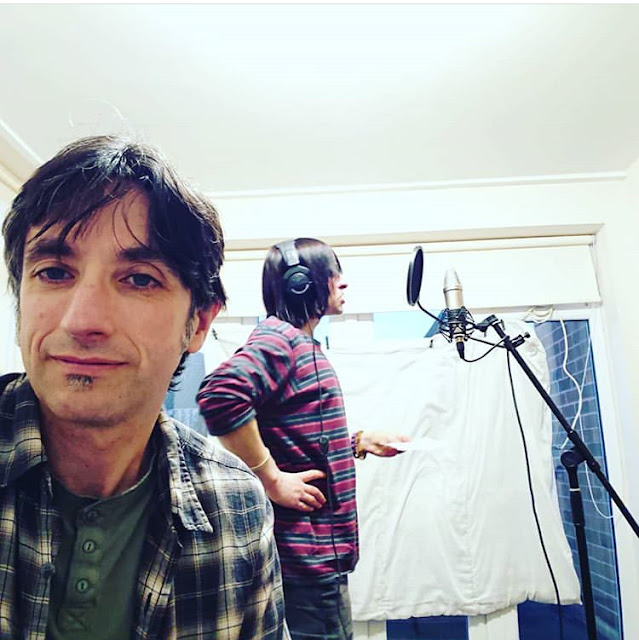 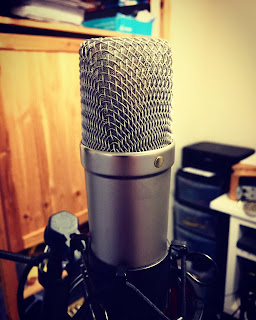 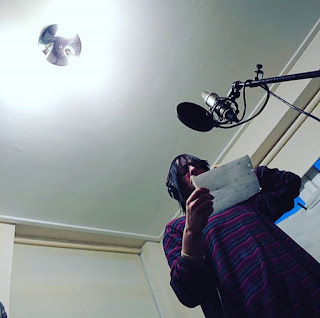 Eagle-eyed readers of this blog might have noticed a subtle recurring theme beneath the surface gig-talk etc; that I had gone to yet another gig feeling bad, ‘under the weather’ or feeling really quite wrecked.

In fact I was properly ill for more than 8 months. My symptoms ranged from feeling a general sense of weakness and feeling ‘really not right’ albeit in an unspecific way, to pains, weakness and stiffness in my legs and arms to the extent that at times I could hardly use one arm or the other, or needed crutches to walk. I also had my eyes swell up at times, and my knuckles swelling up painfully, really affecting one gig in particular which was agony every time I came off stage, the excitement of the gig itself keeping the pain away while I was actually playing (hence the idea of ‘Dr Stage’).

It all started following a rehearsal with The Blue Yellows . I got off the train to head home realising I had just a bit of a sore throat, nothing much at all but a worry nonetheless as we had a gig at The Lymelight Festival the following day.
The next day my singing voice was good enough and the sore throat no worse, but I had that feverish, shredded nerves, sensitive, painful-skin feeling that you get when you have the flu or some other nasty fever.

That was in the 1st few days of May 2019, and I wasn’t to feel better than this again until well into January 2020, and often much, much worse.

Some days later I developed a full-on fever/virus type of thing and could barely leave my bed for a few days. I recovered from this part of the road but the underlying feeling of soreness, illness and fever remained as strong as ever.

I would start to get weirder and weirder symptoms; on one day an arm would be so weak I could barely even lift a light rucksack with it, the next day it would be the other arm, then one leg, then the other  (but mostly both). I walk a heck of a lot and thought that my shuffling along in tiny, painful footsteps might’ve been to do with overdoing it, but it’s nothing I wasn’t used to. I noticed all down one side of my body a had a rash of huge welts. These were painless, not itchy, not red or sore or anything, but a worry nevertheless given everything else going on. This slowly faded but to some horror, returned again a few weeks later. Perhaps the strangest symptoms of all was when one of my eyes swelled up (I looked as if I’d been punched in the eye and all the flesh around it had swollen up), the next day my nose swelled up (it’s big enough anyway, thanks) and then... you guessed it, the other eye! Actually the swollen-nose part of this was really painful, it felt as if all the cartilage in there was about to explode under the pressure. In addition my hunger levels changed, I normally eat massive meals, especially in the evenings. I lost much of my appetite and even lost interest for a while in toast and marmite (which I’m addicted to).

The wrecked, painful legs were the most obvious recurring issue but far, far worse than that was that feverish, nerve-shred feeling underlying it all. On top of all this I felt constantly and utterly exhausted.

Through July and August I was lucky enough to have few commitments until the evenings on many days, and it would often take all my physical energy and mental willpower just to get up to fulfill said commitments, there was no choice, I just couldn’t afford not to.

There were some people I ended up needing to tell, by way of explanation at least. I borrowed some crutches from some lovely friends. I had been due to do lots of help for a music festival but was completely unable to muster enough energy to do this; people kept saying the same thing: “Go to the Doctors!”

Perhaps I’m a stereotypical man in ‘never going to the doctors’? The last time I had gone was in 2012 because I had genuine reason to suspect I might have a serious problem, requiring a hospital scan, the time before that was in 2003 when I broke my pelvis in 2 places in a cycling crash, the time before that was after an eardrum had painfully burst after a few days of infection (I couldn’t sleep for 3 days and nights the pain was so bad), the time before that I must have been a child (when I was taken regularly!). I didn’t bother going when I cracked 2 ribs in another bike crash, or when I broke my toe (I know they don’t really do anything for either of these things other than generally ‘strap things up’, and not for anything else either (if you’re well enough to go to the doctors, you’re well enough to work, surely?).

By August,  the “GO TO THE DOCTORS” concerned voices grew louder, as did those in my head thinking that being ill for months on end can’t be a good sign..

Now I really, really hate using the phone (apart from to go on the internet, obvs!) and after many unsuccessful (and very sporadic) attempts to call my old Drs surgery (I’d only been once), It eventually turned out that this place no longer existed! I had needed to call them to get my NHS number, without which I couldn’t register with a surgery where I live now. My new prospective surgery informed me that this, and other info about me, will have gone to a related place in Scholar Green and on ringing them up, they simply read out my NHS number out over the phone - hallelujah!

You are what you eat.

I had started to have several theories about what might be up with me; fibromyalgia was something I kept looking up as it seemed to have lots of symptoms I could cross reference, some were much scarier even than that.. I had also seen a post by a fellow songsmith about feeling really sore-limbed all over and exhausted and that he needed medical help to increase his iron intake, this made a lot of sense as the issue, one I’d been thinking about more and more.

I’ve not eaten meat for much of my adult life, and having felt “fit as a fiddle” and at least as healthy and strong as I was at 18 or 19 (probably a lot fitter in fact) and without ever taking a single supplement, I know from experience there is nothing essentially ‘bad for you’ about this, quite the opposite in fact. However in recent years I had become incredibly complacent. I am a fussy and habitual eater and I, for perhaps up to a year or more, had pretty much eaten no vegetables at all (and to think, people think that’s ALL we eat)! I do find greens a bit of a chore (you’re probably thinking the same thing if you’ve managed to read this far!) and had gradually just rid myself of them. Stupid really, but having done this for so long while still feeling as fit as a flea, why change?.. again, stupid.

My initial meeting at my new surgery was with a nurse who reported that all my vital signs were good. I explained my situation/symptoms very briefly to the nurse who said I might want to request a blood test.
When the test results came back my nice new Dr phoned me with the slightly perturbing question of ‘are you bleeding profusely from anywhere?’ followed by an ‘are you vegetarian or vegan’ and an ‘ah’ on my response. She told me that I was extremely low in both iron, extremely anemic and also very low indeed in iodine (both contained in green vegetables). I told her that I had already wondered about this and had begun to take iron tablets from a local heath store as well as eat more veg (ie some). After what she had said, and doing some research on the NHS website about iodine deficiency (especially the fact that many of us throughout Europe don’t get enough iodine as there’s simply not enough of it in the soil to get into our veg), I started taking seaweed tablets too, which seemed easier to hand and cheaper than either iodinized salt or actual seaweed.

I currently have more needle holes in my left arm than the average pro cyclist of the late 90s. My next test was set for 2 months later as, the Doc said with my levels so low it would take a long time for me to correct them. I was really worried at and around the time of this follow up test because I didn’t feel fundamentally any better at all. Nevertheless I was told it’s all going in the right direction. I did wonder if something had been missed though.

On Christmas Day and the following few days I became really ill with some horrible virus. I couldn’t stop coughing for 3 days and couldn’t sleep through coughing. I basically stayed in bed, coughing constantly with no desire whatever to eat the huge amount of chocolate I had been given (I’m a chocoholic). In all I was Ill with this for the best part of 2 weeks but I was starting to feel a lot better by January the 1st when I went outside on a lovely, clear new day. My legs felt really sore, I could hardly walk, felt that nervy, shivery Ill thing that I’d felt since early May, I was pleased to be recovering from this virus, but much more worried that I still had ‘IT’...

By the 2nd week in January though all symptoms were subsiding though, including those I’d had for more than 8 months by this stage.

I’m so happy to feel fit as a fiddle again, this time I’m going to keep ‘eating my greens’, without any need for any animal cruelty.

Whatever you do, don’t be a dork and do what I did, be well, eat well!