Last week I had the honour of being described as "a folkie David Bowie" and also having a song, Forget Her said to have a Frusciante-esque arrangement (by someone who would've had no idea I'm a huge fan). Praise indeed. No amount of discussions of artists of such magnitude or cultural impact can ever do them justice, neither can a cover version.

Nevertheless, having worried about how I might possibly do anything but a disservice to Bowie, having been asked by Tim to contribute a song for a special tribute show on his  radio show, I thought I'd better just do it anyway as they say. So did it, I did, in my dressing gown, late on Christmas night.

It was interesting and kind of heartening in a way to me, how many of the 16 year old students I work with regularly were shocked and felt really crushed by his death, his reach was far beyond that of music nerds and musicians, and impacted our culture so deeply and on so many levels, touching and empowering particularly perhaps, those who feel different or alienated, which is perhaps itself part of postmodern culture, therefore widespread, even if many strain to fit in.

In the face of no money to record my most recent album, it was thinking about Bowie's approaches to art that made me realise I should be creative, and go for making what turned out to be quite an experimental, home-made and nil-budget album. I started writing for this in January 2016. He has also undoubtedly inspired countless millions of course to create, to express, to be themselves and to keep on going.

I understand the show will be broadcast live in January with this recording from myself and other artists, 2 years after the great man's death. I will also post an update here, once the listen-again feature goes out. It will be on The Doorstep Mixtape, on Redshift Radio (every Thursday night).

Over the Christmas/New Year period, I should have a lot more free time than usual (i.e. some!), so I plan on doing some more writing and recording for what looks like being a 2019 solo album, with the next Blue Yellows release scheduled for 2018. 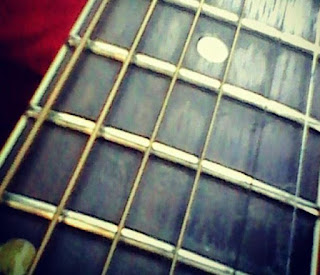 Something that might make it onto a 2019 solo album.

What do musicians do when they're 'busy doing nothing'?


Well at the moment, off the top of my head;
*Maintaining 8 Social Media Sites, 2 proper websites and a mailing list.
*Making finishing touches to a 'home movie' style music video.
*Planning bespoke music lessons for each of my students.
*Researching appropriate material for each individual student based on their own requirements, level and interest.
*Planning a couple 'rig rundown' style youtube posts.
*Catching up on another month's worth of accounts.
*Digital marketing.
*Sending tracks to radio stations.
*Testing/experimenting with new pedal board sounds (more on this soonish).
*Recording a guide track for a potential track on the next Blue Yellows release.
*Scheduling Spring/Summer 2018 gigs.
*Writing and recording for a solo album that I definitely won't have time to release until late 2018 or more likely 2019.
*Rehearsing for 3 types of live show, solo singer/songwriter, original band (The Blue Yellows) and commercial cover band (Rickety Wireless).
*Getting some 'home made' CD versions of Raffesia Dreams made up for a mini-run.
Posted by JT at 3.12.17 No comments: