SO MANY... So I'm just picking one high point for each month, but before I do that, please spare a few moments to listen to some of the awesome musicians we have shared a stage with this year; If you do, I feel sure that you'll agree with me they deserve a lot more recognition. Enjoy  :)

Dan Logan (also in the video with Dayve above, here with Thea Gilmore)


Not forgetting those brilliant mammals with channels, The Angry Badgers! Read their blog at http://badgerodyssey.blogspot.com/ 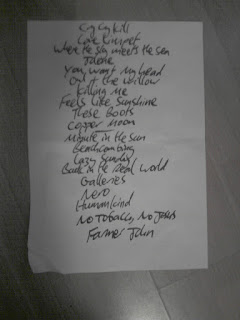 Feb: Some fun promotional radio shows as I remember and made some low-key videos including this one http://youtu.be/XLCJpED7Vn8

March: A gig in our local, what could be better than that?

April: A guest appearance on Simon Newbury's radio show. A great photographer but apparently still learning the ropes on the mixing desk, yet he did a great seat-of-pants job of mixing and recording a live, acoustic version of "No Tobacco", hear it here http://youtu.be/3lpirGL7jm0 plus (OK I'm cheating now) an introductory appearance for a Rick Sanders gig, a great musician and showman.

May: An action packed and packed house for a CreweLive 11 Festival in the town centre.

June: The unfailingly fantastic atmosphere at The Middlewich Boat & Folk Festival and first of many support slots by the great Manchester band Suzie Does It and Dayve Dean. As with so many times this year professional, quality sound provided by those Angry Badgers.

July: A new sound for me, acoustically with my re-found love of nylon strings and a debut solo performance at The International Eisteddfod!

August: Quiet on the public front but some unforgettable private shows in preparation for playing for our own fellow BlueYellows Emma's wedding to chief roadie Pete!

September: My solo debut on "Rosie", my new (to me) classical guitar joined on stage by Hayley Stangelove and her awesome pipes!

November: Rehearsing for a tour-packed September and 3 of the BYs not only went to see The Red Hot Chili Peppers but a huge (10ft high?) image of Hayley appeared behind the band during their encore!


A heart-felt thank you so much this year to Hayley, Emma and Simon from the band for all their hard work, sacrifice and commitment (people often only see the fun side of these things!) plus so many people surrounding the band, without which we wouldn't be able to do what we do, plus everyone who has supported us in any way, including coming to band gigs and my solo gigs and all the amazing musicians and organisers we have met, shared stages with and shared the stress with sometimes. Thank you for making 2011 so ace! xxx
I'm thinking of doing a sort of "highlights of 2011" type of post before the year is out but in the meantime, here's some photos from this event, in which our the fantabulous Suzie Does It, Dayve Dean and Dan Logan did a magical job in support. Thanks also to Verity Gray and Jo Allum from the Suzies for the photos.

"I write nestled in the back of a freezing van over 4 hours from showtime & wouldn't change it for anything :)"

These were my thoughts tweeted (@JonnieGitAhhr if you're that way inclined) and fb updated and although sometime between sound-check and the first band being on I thought this was going to be one of those nights to put down to experience, it ended up being a lovely night thanks to organisation by "The Situation" and great support from Dream Circuit and our brilliant friends Suzie Does It  (and more with the lovely Suzie's in the near future). The Ballroom setting was a *plummy accent* "splendid" venue and the audience, although not exactly huge, were really open to original music and gave us a great time, mad as a box of puppies the lot of them. Special thanks to Verity Gray for the photos (her's are the good ones). Thanks all! ﻿﻿