Mixing it up for Neve. 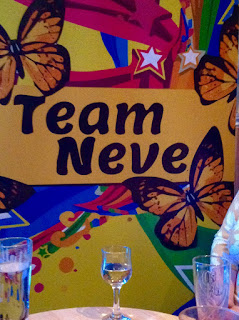 Music for Team Neve Fundraising Night
Bar B at The Market Tavern, Sandbach

To many in music, Neve is the name of a classic mixing desk/console, and The Blue Yellows were certainly mixing it up with some very diverse acts for a special fundraising night for Neve, a young child with a number of very serious neurological conditions (please see the link at the bottom of the text) for which money is needed for support from specialist American medical institutions on top of the quality health care she is receiving through the NHS.

Typically, a musical evening might be of cover acts to provide easily accessible entertainment or original acts for a more discerning music-loving crowd with an ear for new sounds. However the mix seemed to work really well, with the audience lapping up the new music along with the classics. As well as my gang, acts included host for the evening as well as sound-engineer, stage manager and singer-songwriter Dayve Dean, Tim Lee, Luke Stephenson, Bitter and Twisted, and Footsteps who also kindly lent their cajon, thanks guys!

Although Monday-night gigging provides an incredibly tiring prospect, having not yet recovered from the weekend, and having to get back into my routine of working hours through the day and night through the week as well, I'm expecting to look back on this with fondness when (if) I recover.
Please see the Team Neve crowdfunding page at: https://www.justgiving.com/crowdfunding/teamneve

A flood of nice words!

We've just had this ace review from one of the most highly respected music blogs around, Here Comes the Flood;

"Eccentric, funny, tongue-in-cheek vaudevillian garage rock. with enough musical references to keep the music geeks at bay, like the Take Me To The River bit in Spiral Dive. Singer Jonathan Tarplee is an old fashioned balladeer turned indie rock musician, but the band's secret weapon is Emma Alcock with her uncanny knack for syncopation on both accordion and keyboards give the music an off-kilter quality that make the songs jump up and down in a good way."

Read the full review at https://werksman.blogspot.com/2019/03/the-blue-yellows-kitchen-sessions.html 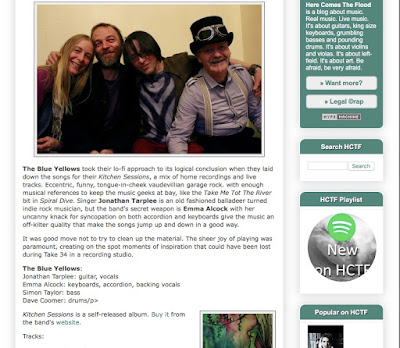 Left the house again tonight to see the Blue Yellows launch their latest album
A post shared by Bob (@wayofthebob) on Mar 1, 2019 at 4:12pm PST

If you're an unhealthy combination of worrier and control freak, then the many months of build up to meeting all the deadlines on the way to the successfully release of an album on time are a prolonged struggle comprising of garnering various people, software programmes, organisations, materials, third parties and so on... all against the relentless progress of time, any one thing threatening to cause a postponement of release-day and therefore scuppering months of promotional drip-feeds, press packs sent to music press, photography, conventional press releases and so on. Such a delay would then either end up being one of many months so that it can promoted properly again, or resulting in a bit of a non-event.
So it's a real sense of contented release I find myself in now, knowing The Blue Yellows can go back to being a gigging band again. Easy! 😉

What a lovely night you lot gave us at Tom's Tap and Brewhouse though, much of the talk afterwards while signing albums and so on, was how the young duo The Bugs owned that stage and played so well, these comments coming from a very knowledgable 'music-crowd' that really know their stuff. Pretty amazing for youngsters Owain and Dylan still at primary school!

Tim Lee, the brilliant singer-songwriter, friend and producer of the new tracks on this album, provided a similarly pitch-perfect tone for the night with his honest, emotionally and texturally rich songs.

The audience was full of familiar faces from near and far, many coming from Manchester as it worked out, and from further afield, some really good friends too, the only problem at an event like this is really having hardly any free moments to speak much.

To those of you there, thanks for giving us such a great night and sharing the happiness, contentment, new tunes and sense of... release.

This is a set-list pic from Tim's own blog-post on this event which you can read, in full HERE. 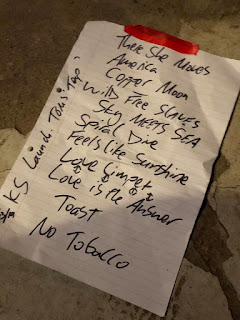 You can now get to the new album on iTunes, Apple Music, Spotify, Deezer or whichever is your favourite streaming or download site, or order the limited edition CD, before they go, below!

New album on the Doorstep.

Last night we appeared on the radio show hosted by 'The 5th Blue Yellow' himself, Tim Lee.

We had a friendly chat about the new album, Kitchen Sessions and played some live acoustic tracks in the studio, it was fun!

An absolute pleasure as always to chat to these loveable reprobates #theblueyellows about their upcoming album launch and where their musical passions lie. A nicer group of people you could never meet. If you missed the #doorstepmixtape show on @redshiftradio tonight, it’s now available to #listenagain on #mixcloud , just search for ‘Redshift Radio.’ @jonniegitahhr @dave_the_drummist
A post shared by Tim Lee (@timleesongs) on Feb 28, 2019 at 3:31pm PST