By which I mean 'awesome' of course...

And IT IS; from the very enthusiastic, friendly crowds who braved the 'traditional' Bank Holiday weather, to the wonderful team of music professionals who do everything possible, to not only help this festival punch far above the weight that any picturesque country village of this size ought to, but a with a helpful team who can and will do everything to sort everything possible for the artists in a calm and thoroughly 'unflapped' way, giving us a great sound of course too. Thank You!

Our good friend and collaborator Tim Lee was among the familiar faces in the crowd, and he composed his own blog post on our set at https://timleesongs.wordpress.com/2019/05/27/the-blueyellows-live-at-the-audlem-festival-2019/ thank you Tim!

Audlem - we love you, and hope to be back soon! 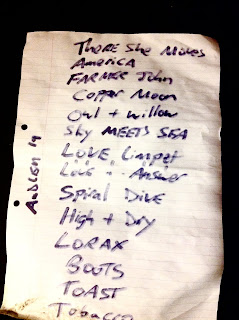 We were festival virgins for Your City Festival, set among the still fairly numerous (for today) music venues in the centre of Stoke On Tent.
For those who don't know, the city centre is Hanley, though most from other parts of the country have never heard of it, confusion added by the fact that the town of 'Stoke', though in Stoke On Trent, is today a bit of an offshoot from the main centre of things in Hanley. On top of this 'the D-Road' is an A-road duel carriageway... Oh I'll shut up now..

Anyway it was a pleasure to play #YCF19 in the tasty environs of Mart's Brewhouse and Tap and we felt like we were on form and playing well, albeit just to other musicians who had just been on, or were about to go on.
Good fun nonetheless! 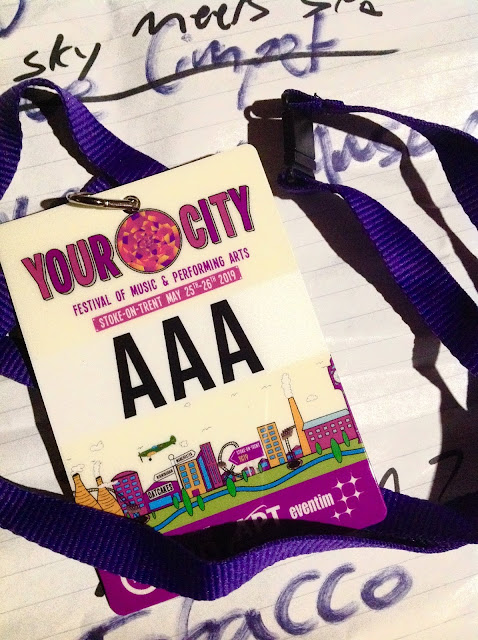 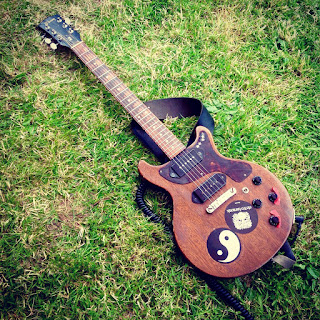 Last night we descended on the location for the first video-shoot for The Blue Yellows   since  'No Tobacco'. The setting was a real-life BBQ at our very own drummer Dave's place with Rob and Ang behind the cameras.
I travelled there with Rob and Ang who, like me both suffer from Social Anxiety,  so normally the thought of going to something like a BBQ could be quite a daunting ordeal. In addition Ang and Rob were both exhausted after full days and I was still feeling ill(!).
Nevertheless our lovely hosts and jovial atmosphere made it a joy, now the real work begins, the endless hours of editing for Rob! Thanks mate! 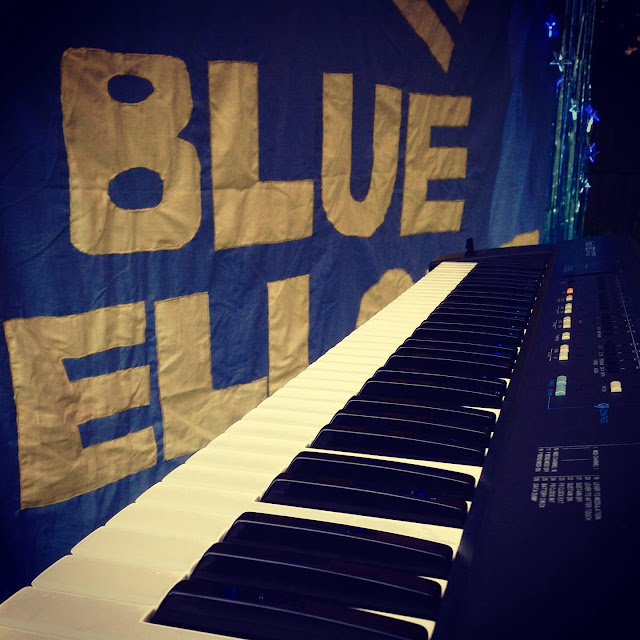 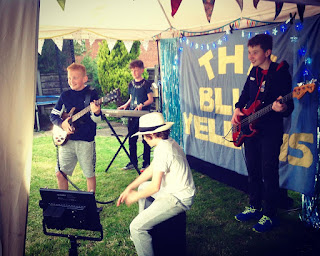 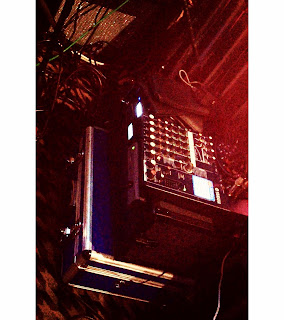 'Dr Stage' refers to the phenomenon known throughout the music industry (and, presumably, the other performing arts) whereby no matter unwell you are, once you hit the stage the adrenaline, public expectation, nerves and excitement will mean you can still  perform with great gusto, in spite of how you felt moments before. There is also of course the famous adage, 'The Show Must Go On'. You just don't cancel a gig unless it is a physical impossibility. There are just so many people you would let down, it's just a no-go unless it really is impossible.

This wasn't the most Ill that I've been on stage either, that was at a Boxjam event a few years ago when I really thought I might collapse on stage at times.

Having done the previous gig with a sore throat and general achyness (see previous post), by this one the virus (assuming that's what it is) has developed into something really quite weird, while having general aches all over, in addition to this I seen to have one tendon somewhere that is so sore, I can barely use that part of the body, yet the next day it is completely fine and another area is afflicted... Well weird!
I'd so far had a left arm that couldn't even lift an empty bag, on gig-day it was absolutely fine but my right wrist really hurt on show-day. As I write now (the day after the gig, though technically it finished this morning) my right ankle is so sore it feels as if I've badly sprained it and can hardly put any weight on it, though my wrist is fine.

Anyway, this was the big city bar of Flanagan's Apple on the famous Mathew Street in that mega focus of music worldwide, Liverpool, with Rickety Wireless.
It was a long gig, 10pm until 1am but I like that, bring more like this on, and consequently we had rehearsed a whole extra bunch of tunes to perform, in fact the 'newest' ones seeming to go down best with this big, raucous party-mad crowd. The crowd were really, really up for it, even getting worryingly raucous at times with stage invasions and some (really bad) singing by uninvited guests on stage,
Great fun over all, thanks to everyone there!

Of course the second I stepped off stage I felt as if I'd just been in the ring for 3 hours with a selection of histories greatest heavyweight boxers, and even stepping back onto my floating home in the early hours was something of an agonised move.

One reason I do this though, is that every gig is something of an adventure, and long after the shivery skin, the aching bones, the waking in pools of sweat has gone, the memories of this great night will live on.
Posted by JT at 11.5.19 No comments:

Sublyme in the Windy City.

Although May, and following some exceptionally warm weather, the sunshine belied the freezing cold Northerly winds, exacerbated by the fact that this part of the world is very hilly, windy and has it's own micro climate.
This was the Lymelight Festival in Stoke On Trent, we arrived early, some using the extra time to catch a local cafe. Both Em and I were a bit under the weather, Em with some stomach pains and me with a sore throat. This didn't effect my singing though at one point, in between verses I thought I felt my throat feel as if it were about to disintegrate or something, but it lasted the set, thankfully, though not the following day!

Harder to deal with was finger dexterity for playing, I don't think I made any mistakes but may have missed out some of the 'notes in between the notes' sounds and the like. The weather also ensured that the crowd was both smaller than you would expect and very wrapped up! I should've worn my extra-warm beany hat, I'd assumed the sun would've managed to make a bigger impact on the temperature.

Nevertheless, a well organised gig and a great sound on stage too. Thank you Lymelight!
Posted by JT at 5.5.19 No comments:

FTUMCH!! Between You and Me