September 26th, 2015. Wilmslow & Alderley Beer & Wine Festival.
A full band show for The Blue Yellows, in semi-acoustic mode, and a lovely festival, a first time for us (& may have also been the first one of this particular festival, if so, it was a great success and would have no doubt they will do it again).

Sadie Pickering, who you may know as an accomplished actor having been in Waterloo Road, Splintered and 24 Seven among other things, is also a soulfully-voiced, talented singer songwriter. She entertained the crowds and introduced us, and the other acts who included Liam McClair who had impressed so much at The King's Arms Festival and the astounding vocal-percussion artist, Kimmy Beatbox.
Being a beer and wine festival there was of course more quality drinking (and eating) to be done than anyone could have any right to expect.
With a similar atmosphere, this felt like to me as the other book-end to the lovely Milefest earlier in the year, as we'll be lucky to get such a summery-feeling outdoor show again this year.
Thanks to the people from The Yard on The Edge and all the fantastic young dancers who entertained us!

No tobacco no Jesus is THE catchiest song ever! Great to see the Blue Yellows yesterday @JonnieGitAhhr @AEWBeerWineFest :)

Birmingham, following in the footsteps of giants... 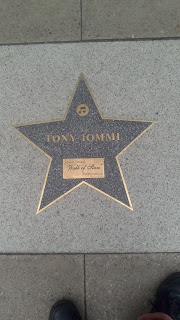 My first gig in the second city and I was following in the footsteps of music giants along the Broad Street walk of stars.

Broad Street's own 'Free Love Club' was the venue, but on this occasion, the illustrious names along the pavement outside and the hard work of the organisers on the inside were not enough to command much of a crowd. This can be and often is, a problem everywhere, though I'm pleased to say the small bunch of music fans who were there made up for their lack of numbers in enthusiasm.

If you find yourself in this great city, check the place out and support this endevour.


On Saturday I headed for Salford to play Paul Heaton's (The Beautiful South/Housemartins) venue, the King's Arms for the annual music and comedy festival.

It was nearly a disaster for me actually thanks only to my own stupidity, having walked from Piccadilly station to the place I was convinced the venue was. For some reason I was wrong, very wrong.

With phone battery and access to google maps fading, I found myself running around various parts of Manchester & Salford before bearing's were finally got again, with the help of a few people I frantically asked.

With a very sweaty half hour to spare, I set up and tried to relax in a really lively, almost boisterous atmosphere. I could not have asked for a more wonderful audience, as soon as I started playing the chatting stopped, they listened, they 'whopped' excitedly during my solo-y bits, and cheered and applauded generously at the end. A wonderful, music-loving, fun-loving, giving bunch of people up for a great time,  if ever there was.
The most eclectic, fantastic talent in every corner of the place, upstairs and down and a great atmosphere all round.
What - more - could - you - possibly - want!?!
Thank you Salford!

All Jammed out at the Food Fest.

As with last year's gig here, drummer (not to mention producer/percussionist/all-round brilliant muso) Dan and myself had just one rehearsal together before attempting to nail it on the night, and he's just so damned good that's all he needs.


There were many moments when neither of us probably new quite how we were going to end a song, or do the middle eight or something, but we somehow managed to jam it out and it all seemed to go well, especially once the crowd had a few more glasses or prosecco or gorgeous real ales from the yummy Lymestone and Hafod breweries, stall's of which were handily close to the stage. Well, it would've been rude not to..

I got there in time to see Oli Ng's second set, Oli's a very talented musician and one to watch, as well as doing a lot of solo work he leads The Eyres and is also currently touring with Tom Seals. Look out for him, and them.

It was great fun, and with Dan's use of the full drum kit and a grittier-than-usual sound with my new axe Red Severn through my amazing little Laney Ironheart IRT-Pulse, it almost felt and sounded like a band gig rather than an acoustic duo. Great fun, not diminished by dancing minions, ninja turtles, lots of friendly faces in the crowd (Including Thea Gilmore - so no pressure..). The lovely and very well fed crowd became gradually more up for it as the night wore on more drinks went down. Thanks to all of you!